Meet Kate, our this week's guest blogger. Kate is the brains behind A Backpack Full of Dreams.

Read below what Kate got up to on our 3 Day Isle of Skye tour earlier this year. Thanks so much for sharing your blog with us, Kate!

You can read more about Kate's incredible adventures from her fascinating blog. Don't forget to check out the official Facebook and Instagram.

I’ve always wanted to explore Scotland, and the three day exploring the Isle of Skye tour with Macbackpackers sounded like a great place to start. Nearly missing my overnight train to Edinburgh, I didn’t get a whole lot of sleep, but wasn’t going to let that stop me enjoying myself.

Our driver/guide, Tim, was fan-fucking-tastic from the get-go. Expletives left right and centre, he made a grand show in his kilt from the second he introduced himself. He’s been taking the tour for 18 years, and was such good value. Throwing well-intended insults at everyone from the beginning.

Full disclosure: from here on in, anything in “…” are Tim’s words, not mine!

We hit the road, stopping to admire the bridge that makes a short cut between Edinburgh and the rest of Scotland. It’s a beautiful bridge, and was a good first checkpoint.

Our next stop was Dunkeld. Once upon a time, this was the heart of Scotland. The cathedral there is beautiful. And the weather cleared in time for us to enjoy being by the riverbank, watching people fishing.

Loch Ness wouldn’t be complete without some straight whisky. Fun fact, whisky is Scottish, whiskey is Irish. Nessy’s earliest sighting was in the 8th century. Columba “rid the town of its monster that was eating people, by feeding it a monk”. He told it to stop eating people. It seemed to work, and then people became devout Christians. When we were there, this really strange noise, like a huge groan from out of nowhere happened. Not saying I’m a believer…but it was very strange.

The loch is 23 miles long, and 250 metres deep. It is part of a greater loch system, made up of three other lochs. It was made so boats could cross from west to east Scotland. By the time it was finished, boats were too big to be able to use it. Oh well, it looks pretty!

The Eilean Donan castle really is something special. You reach it just before the Isle of Skye bridge. In the cloud and rain, it looked so moody. It added to the atmosphere of it all.

We made it across the bridge to the Isle of Skye, to our amazing hostel, right on the water. We watched the sunset, which was truly spectacular. I had to laugh as we were getting ready for bed. There was a guy who had clearly never stayed in a shared room before. He came in looking super confused like “uhhh where do I hang my clothes?” No wardrobe here buddy! Good luck to you. It was so strange going to bed at midnight and the sky still being on fire. The sun never really sets in summer. It’s quite magical.

Saturday morning was “pea soup” according to Tim. For anyone that doesn’t know what that means, it means the weather is beyond awful, you can’t see your hand in front of your face kind of weather.

We stopped off at the river of eternal youth and beauty. Legend has it that a man saw an incredibly beautiful woman and fell madly in love with her. He took her home to marry her, and woke up next to an old hag the next morning. Tim’s words not mine, “she ran back to the river, tits flapping, trying to hold them up, flinging them over her shoulders, and splashed herself with water everywhere”. It was quite a lengthy rendition, but I’ll spare you the extra details.

Tim showed us how to hold our head under, and then we would be blessed with eternal youth. He said he’s 150 but doesn’t look a day over thirty so it clearly works! Calling the river fresh would be an understatement. If nothing else, it woke us up!

Bog cotton grows around here. I thought it was bog like used in the toilet, as they often call it “the bog”, but Tim explained it grows in boggy ground, and was used to make bedding because it’s so light and soft.

We continued on through the pea soup, and then suddenly the cloud lifted. Ready for a wander, we clambered up to the Man on Storr. He had a spell cast on him, and had to always remain in the dark. Tim’s version of the story goes, “he was having a party because his spell was due to be lifted. He drank too much, stayed out, and was caught by the dawn, turning him to stone”. Whatever the version, he makes for a fabulous lookout. It’s about a two hour climb, and it was incredible, watching the clouds slowly rolling up the valley. We could see forever.

Venturing further up the island, we stopped to look at the hexagonal rock cliffs, similar to the Giant’s causeway in Ireland. A perfect day meant another lookout over the island, in rolling hills that were so green it hurt.

The top of the island put us at Portree. Here there stands the remnants of an old castle. Winding back through villages and houses, it felt like time had stood still. The weather here changes so rapidly, it began to make sense why those from the Scottish highlands are known for being a tough breed.

We explored more around our hostel on the Saturday evening. When it never really gets dark, it gives such a good chance to hunt around. Beware of the incoming tide though! Almost had to swim home.

On Sunday we were told tales of Callum McLeod (he’s a real person, there’s a documentary somewhere about him). He wanted his house to be joined to the main road by a proper road. He petitioned the government for 15 years. Then said “fuck it I’ll do it meself”. In 15 years, he built a ten kilometre road by hand, and became quite famous. The only people that used it was him and the people that drove out to interview him. Tim said “that’s the kind of thing you should be famous for. Not some bloody kid singing about love who’s never even had sex!”

We passed Ben Nevis, which was mostly hidden in the fog that had rolled back through. From what I could make out it was quite impressive. We stopped off at the Three Sisters of Glencoe. Lots of Harry Potter was filmed here. We played “imagine the mountain – it can be any shape and size you want!” because visibility was at an all time low. I got to meet some Scottish cows – serious highlight.

Stirling was our last stop on the road. We climbed up to the Wallace monument. Sir William Wallace fought off the English in the 1600s, and was quite the star for this.

We went round a roundabout three times, “I just really fucking love roundabouts, it’s not because I missed my turnoff”. Safely deposited back in Edinburgh, we got goodbye bear hugs from Tim. Seriously theatrical, and still in his kilt, he was a huge softy under it all. He was telling us how much he loves his eleven year old daughter, and all the adventures they go on. He said she still thinks his stories are the best. To be fair I completely agree with her!

Saying goodbye to newfound friends, I called it an early night, prepped for the 5am train back to London then straight back to work that day. All in a weekends work! I had the best time on this trip with Macbackpackers. Their trips are all fairly well priced, and include a lot for what you pay! I had the best time, and Tim was a fabulous guide. I can’t speak highly enough about the great time that I had. Exploring the Isle of Skye is a must if you want to see Scotland in its wild untamed best.

Our 3 Day lsle of Skye tour runs year around. Read more about all our tours. 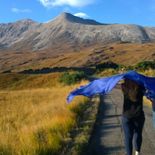