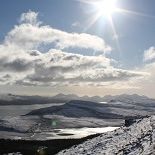 I'm actually from Scotland but I booked the 3 day isle of Skye tour with my Canadian buddy. I've never visited Skye or many of the lochs and mountains on the way up to Skye.... It was amazing! The tour guide, Neil…
Read More Buzz