St Andrew has been celebrated in Scotland for almost a thousand years. The celebration itself is thought to date back to around 1034. However, it wasn’t until 1320, when Scotland’s independence was declared with the signing of The Declaration of Arbroath, that he officially became Scotland’s patron saint. Since then, St Andrew has become tied up in much of Scotland from street names to the ancient town of St Andrews, the name of which delivers from the claim of being the final resting place of St Andrew.

Furthermore, Scotland's flag, The Saltire, also known as St. Andrew's Cross, all owes itself to the Patron Saint but is used all over the world from Florida to the Imperial Russian Navy in various liveries.

St Andrew's philosophy was simple; share what you have with those less fortunate, and be kind to each other. Still, this day anyone, who has visited Scotland, can vouch that his spirit is alive here today. If you’re lost, there’s always someone there happy to point you in the right direction. In fact, Scotland is known around the world for its incredibly warm welcome and friendliness. It’s one of the many things that keeps people coming back to visit.

If you're in Scotland today, you're in for a treat. Many landmarks will be lit up blue later in the evening, and there're plenty of great events such as traditional music, storytelling and St Andrew's Ceilidh. Some of them even lasting for days like The Saltire Festival. You can find more information about the events here or here.

Did you know that Saint Andrew is also the Patron Saint of Cyprus, Greece, Romania, Russia, Poland, Ukraine, the Ecumenical Patriarchate of Constantinople and Saint Andrew, Barbados? 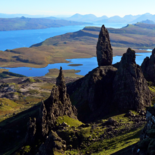