Grab your neeps and tatties, boil that freshly caught Haggis and raise a glass to the great Rabbie Burns.

It's nearly Burns Night! An evening for celebrating Scotland's most revered wordsmith. Hogmanay celebrations are over, but there're always reasons to celebrate here in Scotland. On this day we will celebrate our National Bard: Robert Burns.

On the 25th of January every year, everyone in Scotland gathers to do something so incredibly Scottish: Eat Haggis, Drink Whisky , Recite Poetry and Play Music. We sing, we dance and we listen as the works of this great man are honored in bars, homes and hostels across the country (did we mention our Castle Rock's famous Burns Night). It's incredibly fun and one of the best nights out in the Scottish calendar.

But who was Rabbie Burns? Born on the 25th of January in Dumfries, Burns accomplished much before his passing at just 37. His poems are known the world over and you've probably even found yourself belting out one around the end of the year. He was voted the greatest Scotsman to ever live back in 2009 and his song "Scot Wha Hae" was even once the unofficial national anthem of our great country. No matter which way you look at it, this man was impressive. Here are some more facts about our National Poet that you can dazzle your friends with!

Did you know that there are more statues dedicated to Burns around the world than any other non-religious figure, after Queen Victoria and Christopher Columbus?
Or that Ploughman Poet himself was the first person ever to feature on a commemorative bottle of Coca-Cola in 2009?
What about that 'Auld Lang Syne' is recognised by the Guinness Book of World Records as being one of the top three most popular songs in the English language. The other ones are 'Happy Birthday' and 'For he's a jolly good fellow'?

You can find more interesting facts from Scotland.org's brilliant app 'The Works of Burns', which gives you access to more than 550 poems and love songs. It's also completed with a useful glossary of terms to help get your tongue around the Scots words, and, of course, a full guide on how to host an authentic Burns Supper.

This year we're giving away a special Burns Night Discount Code to all our readers! So subscribe to our newsletter or keep an eye on our Facebook to save yourself some money on our tours! 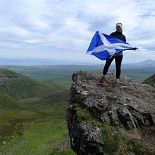