Christmas has come early this year! Our fantastic guides have put together their best travel tips for touring Scotland on a budget. Whether you are thinking about joining on a guided tour of Scotland or looking for the inspiration for backpacking around Scotland, we got you!

On the first post of our brand new and extremely Scottish blog series, you will meet Neil, who will tell you why he became a tour guide and what are his favourite things about touring Scotland.

Why did you become a tour guide?

I became a tour guide by luck. I was backpacking through the Highlands, from my village up through the Highlands of Scotland to Orkney. We were hitchhiking, had terrible lifts, and eventually had to camp outside Inverness. The next morning, after eating breakfast whilst watching dolphins in the Moray Firth, a wee mini-bus stopped. The driver, a tour guide with some space on his bus, picked us up and took us almost the whole way to Orkney. The entire time he was telling us stories, pointing out things beside the road, and I thought ‘He’s being paid for this.” Eureka!

15 years later, after many other jobs, in Scotland and other countries, MacBackpackers gave me the keys and the chance to do my own bus tour around Scotland.

There are lots to choose from. Coming from Perthshire, though, I’ll choose a story from there. It’s set around the southern end of The Cairngorm hills, Beinn a’ Ghlo, specifically, and tells of two hunters who encounter some rather surprising summer weather conditions, gales and torrential rain, then snow and fog, leading them to become lost. They eventually find shelter in the home of a mysterious old woman.

That’s an easy question; the 5 Day Skye & Highland Fling. I like it for many reasons, but mainly the variety. There are so many places to visit, so much variety; it’s always interesting. A good cocktail of sites and activities, and a Monday to Friday duration. Perfect.

That’s rather difficult. I love Spring in The Scottish Highlands, but I think Autumn, just, by a tiny wee bit, beats it as my favourite season. The weather can be more stable in September and October, there are fewer midgies, but it’s the colours; the plant life turning red, orange and golden brown that so impress. Areas of Scotland, especially Perthshire and Argyll, have quite a lot of forest, both native and introduced species, and watching the colours change is always a pleasure.

The Isle Of Skye in Autumn is beautiful; the contrast between the dark hills of The Cuillin and the colourful grasses and bracken never gets old.

There’s no bad time for a trip to Scotland, but Autumn is the best.

I have shelf after shelf full of books about Scotland. One that I’d strongly recommend is Before Scotland, by Alastair Moffat. It’s about the history of what is now Scotland before the nation of Scotland was founded, the geology, migration, environmental and political factors that created the nation.

Another great read is Highland Myths And Legends, by George W MacPherson. It’s full of wonderful stories, magical and historic.

Podcast wise, the one I most regularly listen to is Out of Doors, a BBC Radio Scotland show, a lovely wee mix of nature, history, environmental and activity stories.

I love food and drink, and have the body to prove it. The good news for me is that Scotland produces lots of amazing things to put, eat and drink.

The seafood here is fantastic, according to my pals who eat it, my brother loves the venison, but for me, it’s the tattie: the spud, the tater, the potato. There’s so many ways to cook them, so many varieties; they never get boring. Not glamorous, but neither am I.

To wash the tatties down, I rarely reach for the water of life, whisky, or the other national drink, Irn Bru. Famous though we are for producing whisky, it’s never been my top choice. The good news is that many Scottish Distillers are now making gin, in fact, more gin than whisky these days, and the best of them is Caorunn, from Speyside. I might be in love.

If you weren’t a tour guide, what would you do?

I’ve tried many jobs; the shortest was working in a call centre, that lasted 4 hours. Other than tour guiding, pulling pints was the longest, four years.

If I stop guiding, that’s when my career as an astronaut will take off. 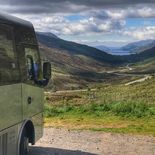