We have been keeping extremely busy so far the beginning of January here at MacBackpackers enjoying lots of snow around Scotland.

The beginning of the year always brings great sales, and travelling is not an exception. There is still a couple of days left of Tourradar's Online Travel Expo or if you are in London this February, come to meet us. The first weekend of February starts with TNT Travel Show, which is held at Olympia on the 3rd-4th February. The month finishes with great deals as well, when you can come to meet us in the All-in-One Travel Show to Ibis Hotel Earls Court on the 24th February.

This week our guest blogger takes us back to 2013. Alanna who runs 80 Frames Around the World has been creative and writer since the early age and believes she will always be travelling. Here is the first part of her adventures on our tour.

Get some travel inspiration, read rest of her adventures, and come to meet us at the Travel Shows to start your own!

This post appeared first on Alanna's blog Around the World in 80 Frames. Original post can be found here and remember to read the rest of Alanna's adventures on our tour as well.

I knew I wanted to see the highlands of Scotland but wasn’t really certain how I might go about it. I didn’t know where I should go or what I should do. I did a quick search through Lonely Planet’s recommended options which took me to MacBackpackers site. I took a look at their options – a day trip, an overnight, a three day and a five day trip. I knew it would likely be my only time I’d be coming to Scotland in the next while (plus I had a good week to fill up before I had to return to Dublin to meet up with my co-worker Sue) so I opted to do the 5 day trip. I’m always on the fence with tours but in this case I knew it would be the best way to see everything on my own and make some friends along the way.

The trip left on Monday morning, so I opted to arrive into Edinburgh a couple days prior to take in the city before heading off. The night before we departed I packed enough clothes into my small bag to last me 5 days since I was informed that space might be at a premium. Not knowing what we would be doing I opted to pack for long days on the bus with comfy yoga pants and tights.

MacBackpackers, in front of Edinburgh Castle

The tour departed from Castle Rock hostel, thankfully at 9 am, as I was struggling a little bit from a few too many beers the night before. Our guide, Duncan, greeted us in his kilt and knee high socks. He gave us the quick run down of the days events – a wee walk through Killiecrankie and a stop at Loch Ness plus lots of other things along the way.

The bus set off, and since I was so brilliant as to sleep until the last possible minute before having to leave to meet the group I hadn’t eaten breakfast. I fell into a sleepy hunger induced nap and opened my eyes as we approached Dunkeld where I caught the tail end of Duncan telling us the story of how the Peter Rabbit stories had been written. A pretty little town known for its cathedral and salmon fishing, I’ll forever remember the Country Bakery, as my ears perked up when there was mention of a good place to grab a bite to eat.

After a walk around the town, a coffee and a bacon and egg roll filling my belly we met back at the bus. While waiting to get moving again I was feeling up to chatting with the other people on the bus. Most of the people on the bus were teachers who were on Easter break from school, and the majority of them were Australian. I became friends with El and Greer over shared stories of hostel related injuries.

Location of the Battle of Killiecrankie

Duncan telling us about the Highland Charge

Back on the bus our next stop was for a wee walk along the water to the Soldiers Leap where the Jacobites fought the Red Coats using the highland charge technique during the battle of Killiecrankie. The first of many many hikes to come I was thankful for my choice in clothes. I was also wishing I hadn’t quit working out in Feb because it became evident I am extremely out of shape.

Next stop was the Ruthven Barracks, used during the Jacobite times. A gorgeous structure up on the hill, we went inside where Duncan gave us a demo of how one properly wears their tartan blanket. Once back on the bus we toasted our own new clan (family) with a sip of whisky from the bottle.

Demo on how to properly wear your tartan. Duncan’s words of advice as he hopped over “You might want to close your eyes”

We drove along until lunch, where we stopped in Aviemore where myself, El, Greer and Sam, my bus buddy found a biker inspired restaurant where we stuffed ourselves on delicious chicken burgers.

Clan means Family – so we toasted our new bus-family with a sip of whisky on the bus.

Following lunch we made a stop at the Culloden battlefields, the location of the final battle on British soil. Even if you’re not particularly interested in war and military history the visitors centre has a great display and depiction of the battle at Culloden. Walking down the hallway, one side depicts the situation from the side of the British gov’t and the other shows the side of the Jacobites. You enter a room with screens on all 4 walls and you can watch the battle being played out (it’s quite violent) around you in a 360 degree effect. Following that you can pick up a GPS enabled audio device that will tell you what happened on the grounds as you walk around the now burial grounds of all the soldiers.

Once again on the road towards Loch Ness we stopped at a different type of burial site. Clava Cairns, located in a tiny little glen down a side road, is a well preserved site showing the way of burial before the typical headstones. Interestingly, the entrance to the main enclosure was designed in such a way that only during the winter solstice would the sun shine directly in the small crawl space.

Not far from the cairns was Loch Ness. I have to admit, aside from the stats on it being one of the deepest and biggest lochs in Scotland, and having the most famous monster, I was a little underwhelmed. What was impressive was Steve, the man who gave up everything 17 years ago and moved to Loch Ness to live in a caravan beside the water and make a living making little Nessie figurines. Even more impressive (or maybe insane?) was the fact that a couple of the guys in the group stripped down to their undies and jumped in. I stuck my hand in… And that was more than enough for me!

Ty and Callan after a dip in Loch Ness

Luckily for the guys our hostel in Inverness wasn’t far from Loch Ness. We arrived,  got checked in and went in search of food. The whole group was heading out to the pub afterwards and we ended up at a pub called Hootananny’s.  I had a great time, as there was live music playing while we were there.

This post first appeared on Around the World in 80 Frames. The original blog post can be accessed here. Don't forget to also read about rest of Alanna's experiences on our tour. Check also @alliefelldown on Instagram to find out more about her travels and adventures.

Our 5 Day Skye and Highland Fling tour runs year around. Read more about all our tours. 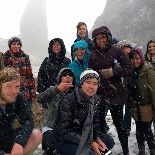 3 day Loch Ness and Isle of Skye (Guide: Neil): If you are planning to spend a week in Scotland and want to see a bit more than just Edinburgh, I would definitively recommend that you use the opportunity to go on…
Read More Buzz